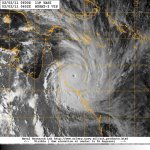 Our thoughts are with the people and communities affected by Tropical Cyclone Yasi, and their safety and well-being comes before everything else.

However, dealing with the impact of the cyclone on cassowaries will be a key priority for DERM (QPWS) and WTMA staff over the coming months. A Cassowary Response Program has already been instigated.

Once the safety of staff in the impact zone has been assured, QPWS will be assessing the situation on the ground, and response plans will be revised to cater to some of the specific details of this event, however the models from previous cyclones events, particularly the lessons learned from Cyclone Larry in 2006, will be reflected in the planning and response. The existing Cassowary Recovery Team supported by WTMA has already been contacted for their input, although many are in the affected area and are unable to communicate at the present time. QPWS is keen to work with key stakeholders and volunteer groups and will contact them over coming days about their support.

Materials and food for feed stations have already been ordered. Much work is still to be done assessing areas of impact and what is accessible and this will not be any easy task. A key message is that we do not want the public to be feeding the cassowaries by hand or in back yards. For safety reasons and to protect the birds we need to ensure this doesn’t happen. It is also illegal. There should be enough food on the forest floor for a few weeks, by which time we hope to have feeding stations established in appropriate areas. If you are talking to other people about the conservation of cassowaries post-cyclone, please remind people not to feed them or encourage habituation: “A fed bird is a dead bird”. Sightings of injured, orphaned, or dead birds should be reported to QPWS’s 24 hour wildlife hotline: 1300-130372

The impact of the cyclone on cassowaries has already been touched on by the media and politicians and by birding networks and conservation groups around the country, and we hope that there will be wide support for cassowary conservation. A media statement has been issued this afternoon.

For those of you outside the region, although there has been some damage to powerlines and vegetation from Cairns north to the Daintree, initial reports would suggest that cassowary habitat has not been badly affected north of Cairns. It has not yet been possible to assess the extent of the damage between Innisfail and Townsville, but it is likely that the rainforest has been significantly affected.

Severe Tropical Cyclone Yasi crossed the coast near Mission Beach between midnight and 1am.