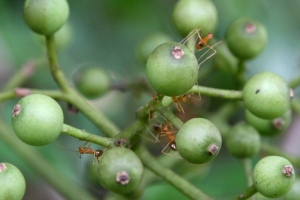 Yellow crazy ants Anoplolepis gracilipes, a serious threat to the biodiversity of the Wet Tropics, including cassowaries, have recently been identified inside the World Heritage Area for the first time in Little Mulgrave National Park near Edmonton.

Yellow crazy ants are among the world’s worst most dangerous invasive species, attacking, blinding, and killing vertebrates and invertebrates, and contributing to the decline or extinction of native species in areas they’ve invaded. For example, on Christmas Island, yellow crazy ants have led to severe disruption of ecosystem services and a change in forest structure by decimating the island’s main predator, red soldier crabs.

Yellow crazy ants form super colonies, with multiple queens, and can reach densities of up to 20 million ants per hectare! They can spread up to 1km per year. 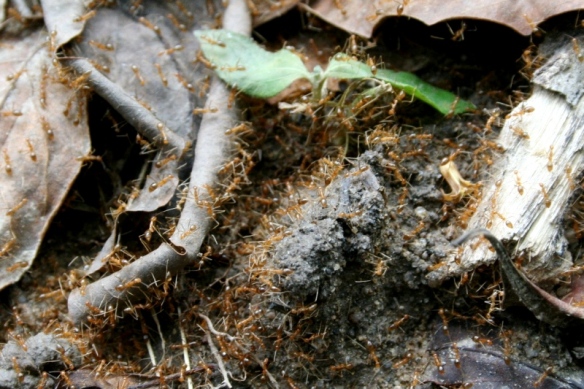 Ground-nesting species, like cassowaries, are particularly vulnerable, and there are fears the ants could blind and kill cassowary chicks.

Yellow crazy ants also farm sap-sucking insects, like scale and aphids, protecting them in exchange for the sweet sticky honeydew they produce. This can lead to mould infections in plants and reduced growth and flowering. In severe cases, this could lead to dieback, depleting cassowary food sources.

The good news is that it’s possible to eradicate yellow crazy ants effectively if colonies are identified quickly. If you live in the Wet Tropics region, we need your help to identify and report yellow crazy ants before they become established!

Please watch this video by the Wet Tropics Management Authority to learn how to identify them, and if you suspect you’ve found yellow crazy ants, please call Biosecurity Queensland immediately on 13 25 23. 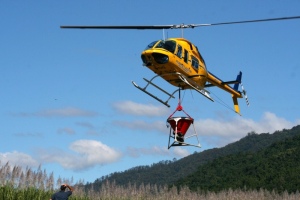 Baits will be dropped by helicopter over the infected areas of Edmonton and Bentley Park, south of Cairns, three times over the next six months to eradicate yellow crazy ant colonies.

Methoprene is a growth inhibitor, blocking reproduction and gradually killing the colonies. It does not harm vertebrates or build up in the environment, and is safe to use around waterways. As yellow crazy ants effectively replace all other invertebrates in colonised areas, there is likely to be minimal impact on native species.

Staff from Biosecurity Queensland and the Queensland Parks & Wildlife Service will carry out surveys before and after baiting, to monitor the effectiveness of the eradication programme.